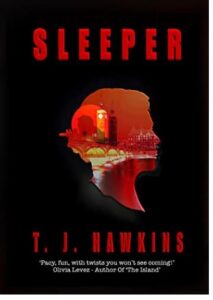 Tom Rivers is a middle aged professional with a wife and two daughters and has a comfortable, if somewhat unremarkable, life. Or so he thinks. During a business trip to London he discovers that he is instead, a genetically superior and highly trained MI5 agent who has been kept in a sleeper state for the past twenty five years and is now expected to save his country from catastrophe.

A terrorist cell has developed a weapon so devastating that it could send Britain back to the Dark Ages and, at the same time, cost thousands of innocent lives. Their leader, a charismatic and extrovert psychopath, has carefully planned his attack on the capital with America in mind as his next target. Except, there was one element he hadn’t predicted – Tom Rivers as his nemesis. The game of cat and mouse races across London as Tom and his team try to stop the terrorists in time and before the threat of nuclear war becomes a reality. But there are also other sinister forces at work, operating from the shadows. Who can be trusted?

With action-packed, nail-biting sequences, Sleeper by T.J. Hawkins is an exciting techno-thriller, mystery novel with surprising plot twists that will keep readers at the edge of their seats from start to finish.   Sleeper is a fast-paced, exceptionally researched portrayal of the tragedies that can create home-grown terrorists and the exceptional bravery of the people who protect against them.

Tom Rivers seems straightforward.  As a successful architect with a wife and two twin girls in college, he’s well-adjusted.  Tom likes his life, his nice house in London, and his beautiful family and he’s a devoted father and husband.  When a terrorist network’s plans begin to reveal themselves as an attack that would put London back into the Stone Age, Tom’s MI5 programming is reinitiated as an exceptional agent–effectively putting all his familial devotion into a supercharged national devotion.

T.J. Hawkins has created a tour de force–somehow tying his vast knowledge of MI5’s inner workings with that of bomb making, the hidden insider trading networks between countries, and the captivating personalities that comprise various infidel groups.  With a unique plot that continually provides suspense, this political thriller brushes the edges of reality so astutely readers may need a reminder to breathe.  Underlying an already moment-by-moment plot, T.J. Hawkins creates illusive shadow characters that keep readers guessing until the very last pages.  His characters, such as an extroverted psychopath, make it hard to guess what’s going to happen—every character can create large-scale devastation, and they’re all willing to go to any length to see their own missions accomplished.  I found myself wrapped up in the vivid details of this book in the best way possible—turning page after page right into the early morning hours.

Filled with captivating characters, a suspenseful plot, and author, T.J. Hawkins’ meticulous and extraordinary writing ability for creating a detailed story structure that continually evolves and keeps readers guessing, Sleeper by T.J. Hawkins is a must read and comes highly recommended.

Sleeper is a real page-turner – a gripping and engaging thriller that delivers plenty of surprises along the way. Exciting, believable and action packed with characters that truly engage.

‘Pacy, fun, with twists you won’t see coming, Sleeper will keep you awake all night!’ – Olivia Levez, Author of ‘The Island’