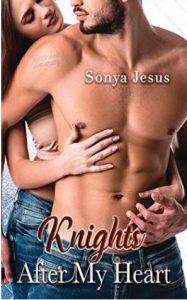 Knights After My Heart by Sonya Jesus

Amelia’s past issues and personal time limits propel her into a relationship that alters her normal life at Westbrook University. Connor, her new potential boyfriend, triggers jealousy, rehashes old relationships, sparks new ones, and ignites a rage in others that will devastate her ordinary life. As she desperately tries to hold on to her pre-Connor life, she struggles to balance the new-found attention while trying to follow her heart. Something she realizes is complicated… very complicated – because her heart has no idea where it’s going.

Connor may be the change Lia is looking for, but he is certainly not the ending Hawk wants for his Queen. Hawk’s invested too much time in planning his future to let some random guy walk away with his happily ever after. He will do anything to protect her virtue, even if it means protecting her from herself because Amelia belongs to him.

He knows everything there is to learn about her…

And when the time is right she will reign his heart.

Knights After My Heart by Sonya Jesus is an intriguing young adult book filled with twists and turns. The main character of the book is Amelia. Amelia has not had much success in the way of relationships.

But she has a prospective new boyfriend, Connor, who has been after her to be his girlfriend. She is somewhat reluctant and has always had a habit of shutting herself down when it comes to the men in her life when things get confining. The problem with Amelia accepting Connor as her boyfriend is complicated. It brings up issues of jealousy, past relationships, it brings on new ones, and sparks anger in others that could ruin her everyday life.

As a college student at Westbrook University and the possibility of a new boyfriend, Amelia has a lot going for her. But things are not that simple for this young women. And if she knew that a guy named Hawk, has been stalking her, she would really be over the top devastated. Hawk wants Amelia to be his queen. He knows everything about her and has been studying her intently. Amelia’s best friend, Robins, is the ultimate friend and the guy that the girls all want to be with. Amelia is popular and seems to have it all. But, to what extent will Hawk go to in order to make Amelia his queen?

Knights After My Heart is one wild ride. It is a romantic mystery filled with fascinating characters and interesting plot twists. I couldn’t put it down and devoured it to the very last page, which was a cliffhanger, causing me to want to quickly get the next book in the series in my hands. With the appealing descriptions and activity of college life, all readers will love to reminisce and dream about college life. This is such an entertaining, beguiling, and riveting sexy story. Perfectly crafted with powerful believable characters.

The wonderful descriptive writing put me right on the scene watching on as the story unfolded. I could see and feel the emotions and relate to what the characters were going through.

The romance in this book is also unique and there is an unexpected twist in the form of a love triangle of sorts. This book is full of mystery with suspicious behavior making it an enthralling suspenseful novel to revel in and be startled by. I became unnerved on many occasions and was stricken speechless.

The characters are fabulous and well developed with strengths, flaws and attitudes. They are relatable and likable except for the questionable and somewhat creepy guy, Hawk. The story is told in two POV’s, Amelia’s and Hawk’s. It works well with in the storyline and flows seamlessly. I was fully impressed by the way Sonja Jesus wrote the dialogue between the characters. She has a unique original voice that resounds on every page. I am definitely going to read more from author Sonya Jesus. Chick Lit Cafe highly recommends Knights After My Heart by Sonya Jesus