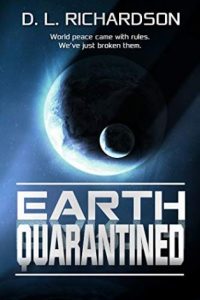 When the virus which killed millions of people is gone, humanity lives in a planet-wide quarantine enforced by an alien species.

The year is 2355. The deadly virus that killed millions of people is gone, thanks to the quarantine measures put in place by the Criterion, an alien species who appeared just in time to save the human race. In exchange for complying with their tough control measures, the Criterion promised us the technology for interstellar travel. We’ve done all they’ve asked, yet we’re still on Earth with no way of getting into deep space. The Criterion are lying to us. What they don’t know is that we’re lying to them…

Kethryn Miller is an award-winning actress, but nothing will prepare her for the role she’ll take on when a strange woman who shouldn’t be alive turns up in the city, threatening to expose the lies that have kept peace on Earth for 200 years.

Earth Quarantined by D. L. Richardson is a fantastic futuristic science fiction novel that is filled with twists and turns and will have readers turning the pages quickly in anticipation while being totally enthralled and entertained.

A deadly virus kills millions of humans, but is now gone thanks to the intervention of the Criterion, an alien race that set up a system and quarantined the entire planet. They promised to give their secret into interstellar planet travel, but after years have passed, they have failed to keep their intended promise. The Criterion continued to stay and control the planet and kept people in colonized segments know as states. They stayed to help rebuild the planet and keep peace among the population. They also put restraints upon the humans to control the population.  Because of these strict measures of intervention and control, many people live underground in secret cities where they are working on a solution to getting humans off the earth and into space. What follows is an exciting story filled with action as the benevolent Criterion and the humans fight to achieve their own specific agendas. The secret contact between the groups of separated people, how they sometimes work together, and their independent struggles on how they deal with the alien rulers, is what drives the plot and story forward.

Earth Quarantined is an outstanding story that science fiction lovers will revel in. The world building is extraordinary with descriptive writing that shines through on every page. The characters are both realistic and relatable. I really felt for the woman that was intended to be the nominal leader for the human race and her inevitable struggles. Readers will be rooting for certain characters at one moment, then doubting them the next. The characterization of the aliens is enthralling and complete. There is nothing missing in this thrilling story. This makes for great storytelling.

Earth Quarantined is unpredictable and extremely engaging. I was fully captivated by the futuristic world that D.L. Richardson has creatively built. The premise and plot are deep and resound with intrigue and fascination. Readers will find Earth Quarantined to be compelling, thought provoking and gripping. The conclusion is outstanding, came as a surprise and is left open for a sequel. Chick Lit Cafe highly recommends Earth Quarantined by D. L. Richardson. Get yourself a copy of this must read one-of-a-kind science fiction novel.