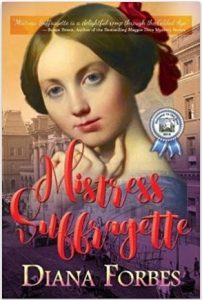 About Mistress Suffragette: Sheltered but feisty Penelope Stanton, growing up in Gilded Age, Newport, Rhode Island is tarnished by her father’s bankruptcy during the Panic of 1893.Penelope quickly attracts the unwanted advances of a villainous millionaire banker who preys on distressed women. After she flees him to nearby Boston, Penelope, by necessity, becomes a paid public speaker in the early women’s suffrage movement. Now she’s speaking out on women’s issues from Boston to New York. But will her disastrous choices in love unravel everything she’s fighting for? In the glittering age where a woman’s reputation is her most valuable possession, Penelope will be forced to discover her hidden reserves of courage and tenacity—and she’ll have to decide whether to compromise her principles for love.

According to Susan Violante, editor of Reader Views, “We were overwhelmed by both the quantity and quality of entries in this year’s Reader Views Literary Awards. This year’s awards program featured numerous outstanding works of fiction. Mistress Suffragette by Diana Forbes was a true standout. This incredible novel has it all: excellent writing, a mesmerizing storyline, and memorable, realistic characters. Mistress Suffragette is an exemplary work of fiction and it is our honor to recognize this title as recipient of the Garcia Memorial Prize for Fiction.”

Diana Forbes is a 9th generation American, with ancestors on both sides of the Civil War. Diana Forbes lives and writes in Manhattan. When she is not cribbing chapters, Diana Forbes loves to explore the buildings where her 19th century American ancestors lived, loved, survived and thrived. Visit Diana Forbes online at: www.DianaForbesNovels.com