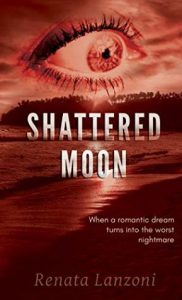 Shattered Moon: When a romantic dream turns into a nightmare by Renata Lanzoni

Shattered Moon is based on a true story. The book explores the heights of an unexpected romance, the lows of despair and the terrors of violent abuse. The purpose of the book is to show you are not going crazy, you are not alone and that there is hope on the other side of pain. An Oxford graduate, lawyer, dependable mother, Maddy has been living a secluded life since her teenage son ran away from home three years ago. Her grief for his loss and her sense of guilt have been plaguing her ever since. When her daughter leaves for university, and her estranged husband announces he is moving abroad, she finds herself without purpose. At 42 she decides it is now time to start living again and accepts her friend’s offer to go away on holiday to Sri Lanka. On the exotic island, she encounters an enticing young man who showers her with unexpected attention. She is swept off her feet by the intensity of his feelings and the effect he has on her. The connection with him is so deep, so sudden and so powerful that she decides to leave her empty life behind and embark on an exciting new adventure.

But the mysterious young man, damaged by a past of suffering and loss, is not what she expects him to be. She finds herself more and more tangled in his web and unable to see a way out. Feeling responsible for his every mood and fiercely protective of him, she fails to recognize the first signs of abuse and only realizes what is really happening to her after months of emotional and physical violence. But the shame and disbelief isolate her from everyone, and she finds herself lonely, utterly sad and fighting against her feelings. The unprecedented rollercoaster of emotions traps her in a toxic and violent relationship. Her life is in danger. Can she save herself? A story of unconditional love, powerful emotions, strong friendships, deep despair and utter terror, hope and resilience. A true account told with the desire to help others find the strength to save themselves and maybe even to recognize early signs of toxic relationships and avoid all the pain and damage they cause. Part of the proceeds from the sale of this book will be donated to Amici di Casa Mihiri, a registered charity which is doing a fantastic and thankless job helping and housing women and young girls affected by domestic violence and abuse in Sri Lanka, giving them safety, security, love and hope.

Shattered Moon by Renata Lanzoni is a heartbreaking, beautiful and enlightening story about the horrors of domestic abuse. Based on a true story, it is a must read novel that will take readers to the heights of romance and excitement then straight into the depths of disappointment, tragedy and agonizing terror. The story follows the main character Maddy, a middle aged woman whose eighteen year old son ran away from home three years ago. Her daughter has left for college and her husband has abandoned her by taking off to another country. All alone, she gathers her strength and determination to live again and decides to go to Sri Lanka with her friends. While on the beautiful island she meets a charming, handsome gentleman that quickly sweeps her off her feet. However, things begin to spiral out of control as this new “wonderful” man in her life starts to become toxic and abusive toward Maddy. But, Maddy doesn’t see the signs of abuse that are creeping in and her emotions are all over the place. Her life and emotions flow between love, ecstasy, excitement, terror, fear, horror and ultimately to victory. As I was reading her story, I could feel every single feeling that she was experiencing.

Shattered Moon by Renata Lanzoni sheds light on the terrible and common issue of domestic violence. With both emotional and physical abuse, the author writes of the real horrors these women from all over the world endure. She exposes the, many and various, beginning signs and what to look for in a man that could be a potential abuser. It was fascinating to watch how the abusive relationship developed and evolved. This story will chill the reader’s spine as they read about the severe emotional and life threatening abuse that Maddy went through. It is intense, romantic, violent, entertaining and realistic. From the very first chapter, I was pulled in and fully engaged. Maddy’s life story will draw readers in and reveal the real life dire scenarios of how one can be pulled into a tangled web of love and terror, unable to escape it all because of the emotional rollercoaster the she was forced to ride.

Renata Lanzoni shines light on the subject of domestic abuse like no other author has been able to do. This book will help many to understand the psychological aspects of the whole ordeal and how to avoid the horrible trap from the get go, by recognizing the signs. Maddy just didn’t see it coming, and so it is with many women who become entangled in such a relationship. It became confusing, unescapable, dangerous and life threatening for Maddy.

Author, Renta Lanzoni writes with deep empathy for the abused woman, and her descriptive writing puts the reader directly on the scene experiencing all that is unfolding. I love her unique and interesting writing style which is easy to read, fast paced and electrifying. It is written in short chapters that leave the reader hanging and turning the pages quickly. Her well drawn characters are fully developed, realistic and relatable.

Shattered Moon is a thought provoking, compelling, educational and highly entertaining read. Author, Renata Lanzoni has an original voice and excellent writing skills. Readers will enjoy this book while feeling every emotion from glorious to hellish. Overall, Shattered Moon is a must read, 5 star book filled with meaningfulness, romance, suspense and inspiration. Highly recommended by Chick Lit Cafe.