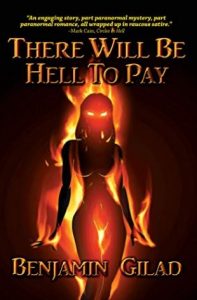 There Will Be Hell To Pay by Benjamin Gilad

Jack is driven to the brink of insanity with this discovery, as his girlfriend, Harmony tries to keep him from being killed. Or does she? In the midst of it all, Jack has to make a choice between justice and forgiveness. He chooses justice, and all Hell breaks loose, and it’s a good thing.

There Will Be Hell To Pay by Benjamin Gilad is a clever, entertaining story filled with mystery, conflict and intrigue. Jack Merriman is an ex-law enforcement officer. He is forty five, alone, without any family and his sister, Leah has passed away. He reluctantly accepts employment with the MHB, which is the Memory Hunting Bureau, a mysterious agency whose task is to save the In-betweens – people who have died and the memory of them is vanishing, but who can remain “alive” as long as someone remembers them.  Jack travels the world uncovering vanishing memories when he meets Harmony whose specialty is the role of magic in modern time. Readers will contemplate whether she will be his love interest, or something more, while she tries to keep him from being killed. Jack is pulled into the celestial realm where he can see and hear, and discovers a chaotic and incompetent organization. Jack is almost driven to madness, while readers will be driven to the edge, while reading this remarkable book.

There Will Be Hell To Pay by Benjamin Gilad has suspenseful, intriguing twists and turns, while Jack is finally on the track of the unknown driver who killed his sister, whose memory is vanishing too.  The political workings of the heavenly beings is smart, and described with depth and imagination. Author Benjamin Gilad brings readers an engrossing story while interpreting Genesis’ “So God created man in His own image” literally. Glued to the pages, I was taken on an emotional journey between earthly activity and the spiritual interactions of cosmic beings, while glimpsing into their petty and at time nefarious fight for power. There Will Be Hell To Pay is a most interesting, original and compelling read with a solid plot that drew me in from start to finish.

I couldn’t put There Will Be Hell To Pay down – not only are the characters incredible, but the pages are filled with absurdities and humor. This book will appeal to a variety of readers. I was very intrigued and fully entertained by the clever idea of the celestial spheres, the spiritual realm, their activities and thought-provoking politics.

Purchase There Will Be Hell To Pay by Benjamin Gilad today!