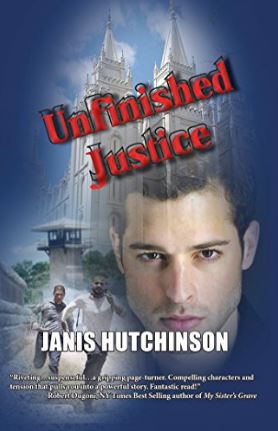 In this 1935 historical suspense thriller, praised as “riveting and gripping” (Robert Dugoni, NY Times Best Seller of My Sister’s Grave), Ed Bowman, small town reporter for the Casey Clarion in Virginia, is unjustly convicted for the murder of his wife, committed by an escaped prisoner whose murder trial he just covered with an exclusive article that virtually guaranteed a guilty verdict.

Sentenced to life in the State Penitentiary, and losing faith in God to right his situation, he determines to redeem his shattered life and makes a daring escape to track down the killer in a high-risk chase across six states to the salt flats of Wendover, Utah. But an unexpected betrayal by a befriended Mormon leader brings his plans to a sudden stop, leaving him with no hope short of a miracle.

Unfinished Justice is a novel set in 1935 and based on the true story of Ed Bowman, a reporter for a small town newspaper in Virginia. When Ed covers the murder trial of Gunther Buford, he writes an exclusive article after overhearing a confidential conversation between Buford’s defense attorneys that virtually guarantees a guilty verdict. The man is convicted and sentenced to die in the electric chair.

Buford breaks out of prison, intent on seeking revenge by killing the reporter who wrote the story. But in the ensuing violence, Ed’s wife is killed instead and Buford flees. In an ironic twist Ed is convicted of his wife’s murder and sentenced to life on a chain gang. For years Ed labors while being viciously abused. Finally, after four long years of planning his escape, Ed manages to gain his freedom.

Determined to locate Gunther Buford and bring him to justice, Ed tracks Buford to the small town of Wendover, Utah where the man has a new identity and occupation, and has also changed his appearance. Ed now has to determine who Buford really is, find evidence to prove he killed his wife, then clear his own name by bringing him to justice.

Unfinished Justice is a fast paced, riveting story filled with injustice, danger and even some romance. Extensive research by Janis Hutchinson went into this hard core novel that depicts life on chain gangs back in the 30’s. The descriptions are vivid and shocking to read, yet very engaging and enthralling.

The characters are well developed and fleshed out. Ed evolves throughout the story and comes to realize that God was with him the whole time. He is a strong, likeable character who is relatable. The author did a great job with all the characters and descriptions, and I felt like I knew them and was there with them.

Unfinished Justice is a fascinating read which features a time in the past that rarely gets portrayed in historical fiction novels. It reminds me of the fugitive, but slightly different. The harshness of chain gang life is depicted accurately and brilliantly.

This is one of the best suspense, thriller and fugitive type stories I have ever read. It is a gripping page-turner. I couldn’t put it down and kept reading faster and faster to find out what was going to happen next. Janis Hutchinson is an excellent writer and has done a beautiful job with Unfinished Justice. The storyline is full and exciting. The ending is intense and satisfying. I would read this one again―it’s that good.