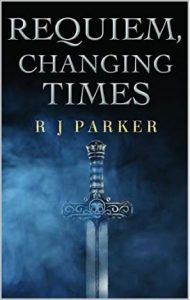 Clint and Corbin are having a weird day. Best friends for life, things are getting a little strange around their town, and at school. When they’re followed by a strange man looking for Clint and later attacked by an imp, it makes sense to retreat to the safety of home. But when strangers from another world, Banks and O’Neil, arrive with their medley of allies, things get even weirder. Why are they here? What do they want? And what is The Requiem that everyone keeps talking about? As Clint and his friends and family are drawn deeper into a thrilling adventure, only one thing is for sure. They may not be getting out alive. And class with Mrs Christenson will seem like a walk in the park after this.

Requiem, Changing Times by R J Parker is fun, addictive and a real page-turner.  Fans of the Guardians of the Galaxy and Stranger Things, will love this entertaining and compelling young adult urban fantasy.

Take a little magic, a jovial Scottish Dwarf, a misshapen Fury, an ordinary teenage boy, add an ogre or two and drop them all into a typical family, and then wait for the fireworks!  Holbrook School has no idea what’s happening!  Dead bodies have the police baffled.  Mystery lies over the town as supernatural beings create havoc.  Clint Holden (unbeknownst to him) is supposed to be the holder of the Requiem.  A race is on between The Spell Binder and his ogres and imps, and Banks and O’Neil and their crew to reach the Requiem first.  Amongst all the mayhem Clint and his brothers and sisters endeavor to carry on regardless, making trips to school an out-and-out war zone.

Not only did I find this book exciting, but it also made me smile nearly all the way through.  I don’t want to spoil things, but I have to say that the Dwarf O’Neil made me chuckle the most, loved his appearance at the school Halloween dance!  Also, I really enjoyed the chapter titles, for example a chapter where Clint has to take his parents a letter from school about his bad behavior is called, Do I Need a Lawyer!

All fantasy creatures and mayhem aside, this book is about family.  Still raw from the death of his father, Clint finds it really hard to accept that his mother has married again.  Thrown into a household of strangers he’s supposed to call family, Clint finds a rage within him that he doesn’t know how to handle.  His step-dad John has also been married before and already has children.  With a batty, TV crazy grandmother confined to her room upstairs, and a Goth step-sister isolating herself in the cellar and everyone in-between, the house is teeming with people, but loneliness keeps Clint feeling brittle.  Through the extraordinary events that come crashing down on them they start learning what it means to be family.

If you are an author and would like your book reviewed and/or promoted, please feel free to fill out Artisan Book Reviews book submission form for qualification and to receive more information today.