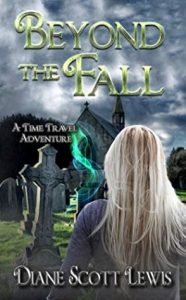 Beyond the Fall by Diane Scott Lewis

Tamara Ledbetter, dumped by her arrogant husband, travels to Cornwall, England, to research her ancestors. A trip first planned with her soon-to-be ex. While in a neglected cemetery, she scrapes two fallen headstones together to read what’s beneath, faints, and awakes in 1789. Certain she’s caught in a reenactment, she fast discovers she’s in the year of the French Revolution, grain riots in England, miners out of work, and she’s mistrusted by the young farmer, Colum Polwhele, who’s come to her aid. Can a sassy San Francisco gal survive in this primitive time where women have few rights? Could she fall for Colum, a man active in underhanded dealings that involve stolen grain, or will she struggle to return to her own time before danger stalks them both?

Beyond the Fall by Diane Scott Lewis is a fabulous and compelling, time-travel, romance story that readers will revel in. The story follows Tamara Ledbetter who lives in San Francisco and has just gone through a troublesome divorce. She goes to a cemetery in Cornwall, England, to research her ancestors. While there, she rubs two collapsed headstones together and then passes out. Suddenly, she awakes to find herself in 1789 during the French Revolution. A handsome farmer, Colum Polwhele, shows up to help her. He thinks she is a spy, but he isn’t all that trustful himself, as he is a thief and deals in robbing grain. Can this modern woman live in such a primitive setting without all the contemporary amenities that she took for granted? Or will love prevail?

Beyond the Fall is filled with twists and turns as Tamara’s life grows more and more complicated. While danger lurks, she must learn to survive it all, in a time and place that is foreign to her. This story is captivating and full of eye-opening surprises as author, Diane Scott Lewis, weaves a tale that is compelling and engaging. The historical aspects are well researched, written and brilliantly assessed. She takes readers on an adventurous journey as they follow the life of the main character, Tamara Ledbetter. The character development is skillful and impressive. They are well developed with interesting personalities that readers will immediately connect with and relate to. I was intrigued by Tamara’s predicament and whether she would be able to conform to life in 1789, Cornwall, England, or return to her modern day life that she was so used to.

Beyond the Fall is a multidimensional story that all sorts of readers will certainly enjoy. The descriptive writing is fabulous and had me on the scene feeling like I was actually there in England during the French Revolution, the grain riots and the miners that were out of work. The clothing and settings are clearly and vividly described and I was very captivated with it all. I couldn’t put this book down and turned the pages quickly and late into the night. This book will be a favorite for time-travel, romance enthusiasts and Chick Lit Café highly recommends it. It is an original work of fiction written with a unique and extraordinary voice. Diane Scott Lewis is an exceptional writer and I am eagerly looking forward to reading more of her amazing books.

Purchase Beyond the Fall by Diane Scott Lewis @Amazon Here