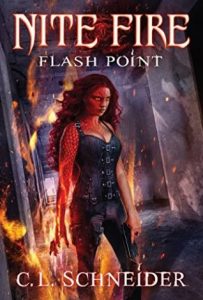 Slated for execution, shapeshifting assassin, Dahlia Nite, flees her world to hide in the human realm. As payment for the shelter they unknowingly provide, Dahlia dedicates herself to protecting humans from what truly lives in the shadows. Moving from town to town, she hunts the creatures that threaten an unsuspecting human race; burying the truth that could destroy them all. But the shadows are shifting. The lies are adding up. And when Sentinel City is threatened by a series of bizarre brutal murders, light is shed on what should never be seen. The secrets that have kept humanity in the dark for centuries are in danger of being exposed. Wrestling with a lifetime of her own deceptions, Dahlia investigates the killings while simultaneously working to conceal their circumstances. But with each new murder, the little bit of peace she has found in this world begins to crumble. Each new clue leads her to the one place she thought to never go again. Home. Flash Point is the first book in the Nite Fire Series.

Nite Fire: Flash Point by C.L. Schneider is an incredible paranormal and urban fantasy story that will leave readers craving more. The story follows Dahlia Nite, a hybrid dragon and shapeshifting assassin with a drive for protecting the innocent. She was a committed and dedicated executioner, in her original world of Drimera, until her position was taken from her and she was sentenced to be executed herself. Now, she lives among the humans, protecting them from the creatures and evils of the unseen world, while concealing the truth of her origin and the creatures therein. The city she has come to love, Sentinel City, has come under attack in the form of gruesome murders. As an arson investigator, she is helping to solve the crimes, all the while hiding the truth that these brutal attacks are coming from her own kind and world, a reality that humans should never know about. However, as the serial murders progress, she is beginning to feel the need to take further action and return home, to a place she never wanted or should return to.

Nite Fire: Flash Point is a gripping novel filled with the paranormal, mystery, dragons, shape shifters, danger and all kinds of fascinating and horrendous creatures. The world building is awesome, while the witty dialog and descriptions held me completely intrigued and engaged. The writing style is unique and drew me in from the very first chapter and held my interest onward to the final page. This is one of the best urban fantasy books that I have ever read. I couldn’t put it down and turned the pages quickly in excitement and intensity. It is fast paced and completely engaging.

The characters are wonderful. The heroine, Dahlia, is strong, likable, fierce and compassionate. The secondary characters are as good, or better, than the main ones. I loved everything about this novel and the complex world that C.L. Schneider has created. The storyline and plot are well thought out, intriguing and extremely well written. It is easy to understand and flows nicely, giving readers everything they need for a great read in the urban fantasy genre.

Nite Fire: Flash Point is filled with high intensity action scenes, adventure and suspense. It is riveting and entertaining, leaving the reader filled with fever and anticipation for the next book in the series. Chick Lit Café highly recommends one of the most unbelievably, fantastic urban fantasies we’ve had the pleasure to read in a very long time. – Nite Fire: Flash Point by C.L. Schneider

Get yourself a copy today, and be thrust into a magical world filled with intrigue, otherworldly creatures, a badass heroine and a remarkable story you won’t want to end.