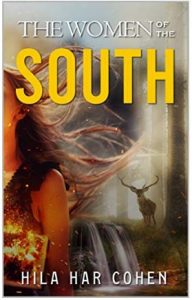 The Women of the South (The Voyage) by Hila Har Cohen

Taken by a rival tribe at a time of war, all Ni-Han wants is her freedom. Discovering her hidden abilities, she needs to decide between love and fate.

Ni-Han is an exceptional, young woman with special powers. When war breaks out between rivaling tribes on the southern continent, she witnesses her parents’ brutal murder and is taken captive.

There, she meets four other captive women. Their shared destiny is an immediate bond, an enduring friendship that survives tremendous upheavals, the hardships of war, and their romantic liaisons.

In time, Ni-Han discovers her hidden abilities, is exposed to family secrets from the past, and falls in love with the handsome Leo.

Will she trust him enough to devote herself to their relationship, or will she follow the path of fate?

I have to say I really enjoyed The Women of the South by Hila Har Cohen. It is superbly written and kept me captivated to the very end. It is a romantic fantasy story where the main protagonists are not warrior men, but women. Brought together by terrible hardships, our main character uses the gentler powers of healing and her intelligence to discover her hidden strengths and conquer evil.

Ni-Han is our hero. She has special powers and a cleft lip. Her story begins as her and her loving family set forth on an arduous journey through their battle-torn country. Things don’t go well, and Ni-Han witnesses the brutal murder of her parents, she is taken captive and only stays alive because of her quick thinking and herbal skills.

In captivity, she meets up with other women and they soon bond together. They learn if they work as one, they can, not only survive but, outsmart their captors and escape. However, freedom brings its own hardships and Ni-Han takes on the role of crusader fighting for justice and what is right.

I really like the fact that the hero of this book is seen as abnormal and disfigured by the culture she lives in. So many heroes, men and women, are perfect – too perfect to be true in fact. It was refreshing to read about a strong, intelligent woman who despite the so-called physical issues she faces, was able to become recognized for her brilliance and courage.

Also, Ni-Han makes a much more believable hero than an armor-clad warrior. She is not perfect, but still manages to change her world for the better. I found this aspect of the book really appealing. It gives all of us hope that regardless of who we are we can still make a significant difference to the world if we choose. Reading her story filled me with hope.

The Women of the South by Hila Har Cohen is action-packed and a real page turner. I found myself being drawn into this fantasy world by the wonderful writing techniques of the author. Her use of prose was the one of the best features of this book. This book will certainly please avid fantasy and romance readers, and also appeal to a much wider audience because it is well written and so entertaining. Book reviewed by Susan Day for Chick Lit Café.

Order your copy now and enjoy a story of courage, friendship, loss, love, and the will to survive.

Purchase The Women of the South by Hila Har Cohen today!