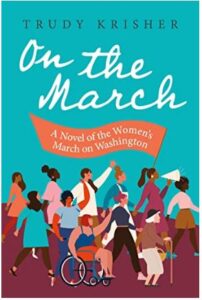 On the March: A Novel of the Women’s March on Washington by Trudy Krisher

If you’re familiar with the power of #metoo and #shepersisted, you’ll understand the power of On the March: A Novel of the Women’s March on Washington.

A work of Women’s Fiction that has crossover appeal in the New Adult and YA market, ON THE MARCH is about three women, all strangers, who meet on the bus journeying from Kansas to Washington, D.C., to participate in the 2017 Women’s March on Washington. Henrietta Oldham is an elderly woman who runs a failing antique store; Birdie Jackson is a shy African-American teenager who is marching at the insistence of her feminist aunt; Emily Messer is a recent college graduate who needs more in her life than her job as a barista. All three women have secret, undisclosed reasons for attending the march, and in the course of the novel, as the women begin to know and trust each other, these secrets are revealed.

Although Henrietta, Birdie, and Emily appear to have little in common as they begin their ride, ON THE MARCH confirms that classic women’s issues – sexual harassment, pay inequity, self-sabotage, even bra-stuffing – serve as common intersectional bonds among women across the generations. Even more, sharing their stories on the 34-hour trip together as well as participating in the march it becomes the catalyst for changing each of their lives for the better.

ON THE MARCH is about the revived feminist spirit of our times, an intellectual, cultural, and often hilarious novel of the zeitgeist. It will appeal to millions of women who are now culturally and politically engaged, whether they marched or not. The idea behind the novel was to watch the way the events of the march helped women of different ages, races, and backgrounds come together to create positive change in the world and in each of their lives.

In a world being over crowded by indie-books On the March stands head and shoulders above the rest!  A celebration of womanhood and the uniqueness of personality; On the March: A Novel of the Women’s March on Washington by Trudy Krisher is a remarkable novel that carries a powerful punch and deserves to win awards!

While centering the story around three main characters, the author has brilliantly woven together an in-depth discussion about everything feminine.  What a book!  I cried so many times while reading this, don’t be misled by that statement, the book is uplifting and entirely inspiring.  Henrietta, in the last quarter of her life, full of regrets; Birdie, in the first quarter of her life, full of sadness and questions, and Emily a college graduate without a job or a vision.  The three of them are about to embark on the adventure of their lives, a bus ride to Washington, DC to take part in the protest march against the anti-women comment made by the president – the largest, single day protest, in American history.  Their journey is breathtakingly wonderful.  It becomes a period when all three evolve and grow, where they learn to look back, so they can see where they are going.  Most significant line in the book, that tightened my throat and brought tears to my eyes, ‘Her decades of silence had been given a voice.’  Staggeringly triumphant, this is a celebration of womanhood; it is both educational and enlightening.

Trudy Krisher writes with panache bringing characters to life with a beautifully artistic flourish.  Intricate details splash across every paragraph making the scenes jump off the page.  With an eloquent writing style, which is smooth and easy to read, this is literature fiction at its very best!  On the March by Trudy Krisher comes very highly recommended by Book Review Magazine.

Buy On the March: A Novel of the Women’s March on Washington by
Trudy Krisher today!!

If you are an author and would like your book reviewed and/or promoted, please feel free to fill out Artisan Book Reviews book submission form for qualification and to receive more information today.