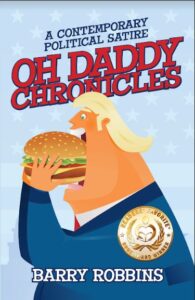 Can’t stand Trump? Love making fun of him? Well, this is the book for you.

Imagine if you could have eavesdropped on Donald Trump’s conversations in the Oval Office. That’s precisely what Oh Daddy Chronicles does in 46 skit-like episodes that have been described as Saturday Night Live on steroids. The conversations with his family, advisers, cabinet secretaries are fictitious, made-up, imagined... or are they? Just how demented, imbecilic, crass, self-centered, ridiculous does his side of those conversations have to be before you remember that Oh Daddy Chronicles is fiction?

“What a creative and fun way of looking into the madness that was the Trump Administration.”

“Similar to a Saturday Night Live episode, it makes fun of everyone, especially President Trump. It gives answers to questions, like why the president wanted to use hydroxychloroquine and what happened with the Bible incident.”

“It’s a collection of SNL cold openings on steroids that read ‘exactly’ as if they were taken from real life transcripts.”

— At a time when there is very little to laugh about, Barry Robbins truly lifts a reader’s spirits with Oh Daddy Chronicles.

— The closest correlation I can make is to the play Spamalot, which drips with the same satire and silliness as the Oh Daddy Chronicles.

My initial plan for this book was to read a chapter or two a day until it was finished, but when I finally sat down to read it, and before I knew what happened, I found myself staring at the last page wishing there was more.

Essentially, the writing style was the shining star–it felt like I was watching an SNL skit–every episode is well thought out and even to the end of the epilogue Barry Robbins delivers with humor.

Perhaps we have in author Barry Robbins a new and more direct version of Douglas C. Kenney, cofounder of the National Lampoon magazine and the National Lampoon Radio Hour, or even the great writers who collaborated to produce the famous and hilarious British movie, The Life of Brian.

***This is Saturday Night Live, in written form, on steroids.***

This could be described as a Marmite book; you will either love it or hate it.

In a nutshell, Oh Daddy Chronicles by Barry Robbins is a carnival ride through the Trump administration era.

The author has a genius talent for making the ridiculous seem sublime, leaving you in stitches.

Barry may be a candidate to fill the spot left by Art Buchwald.

So, what are you waiting for? Let’s lampoon Trump together and “Make America Funny Again”. Click “Buy Now” to join in the fun today.

Oh Daddy Chronicles was the Gold Medal Award winner for Humor/Comedy Fiction in the Readers’ Favorite 2021 International Book Awards, one of the largest book contests in the world. 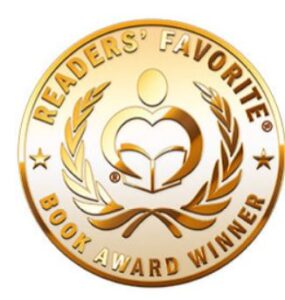